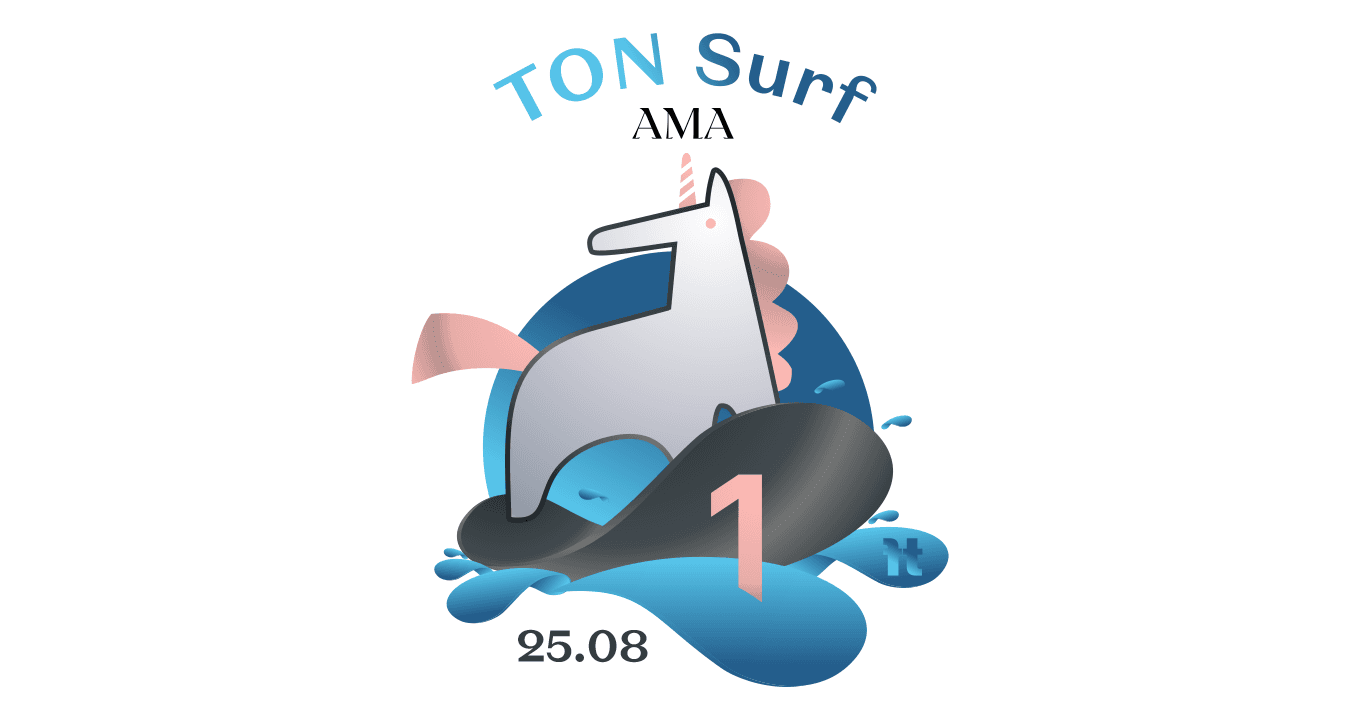 At the regular meetup, Surf specialists talked about all the updates, improvements, and new projects they implemented in August.

Evgeny: Greetings, everyone. Today we are holding the third AMA session, which has already become traditional. First, a brief overview of what happened during the month and what we are currently working on.

Throughout August, we have been working to improve the current situation with Surf. There were quite a few technical tasks, these tasks are not visible under the hood, but we had to complete them to proceed.

Among the obvious things that appeared in Surf, we added charts, graphs to staking. We’ve made interface improvements related to the output and display of data. But it’s not just some kind of service that builds charts, but it is in fact work with charts from a live blockchain.We continue to work on improving Help TON Surf. A large number of articles have appeared that describe what is staking and how the mechanism works in Free TON, how to stake in any DePool in blockchain, and much, much more. Accordingly, we are expanding the FAQ section. I think in September there will be about 20-30 more articles with answers to questions that appear in the community.

In addition, we completely rebuilt the PIN code screen. It works correctly now. We also fixed the problem of displaying balance information.

We also added a GET TONs section, with links to popular places, exchanges, exchangers, and primarily contests that take place in Free TON. We made sure to include the ones that users voted for.

If we talk about our DeBot browser and the entire DeBot universe, then we have added several new interfaces there. There have been many fixes as a result of feedback. There is more and more feedback.

Of the additional interfaces, I will note the “date” and “time” — that can be used to interact with users. Also, it is an improvement on the QR-code, respectively, it is possible not only to scan the code inside DeBot but also to generate it in it.

I would also like to talk about the August projects that will be implemented soon.

I think this Friday (08/27/2021) we will introduce the multiverse in beta. It’s a big story about multi-wallets. TON Surf will now allow you to connect wallets without the additional need to switch, log in and log out. Multi-signatures will appear in the multiverse: the user will be able to use different signatures for different activities, not necessarily his main one, where his main funds are located. It is convenient to use it for management, among other things. These multi-signatures also work inside DeBots. It will be possible to call this interface in DeBot and help users to work with different signatures.

And the most important thing is, of course, multi-network support.

Starting this Friday, Surf can be connected to absolutely any network, including local ones! The development of DeBots should at least increase significantly.

The next thing we are preparing and what will appear very soon is TRUE NFT.

Full TRUE NFT support in Surf will appear soon. It will be enough to buy, exchange, acquire… yes do anything on any external resource that uses TRUE NFT. And Surf instantly and without any action on your part will display this TRUE NFT in your wallet.

The next project is the Surf activation. We were finally able to implement it, and this functionality is being tested. Now there will be no need to “go” anywhere and ask someone for crystals or just try to buy 1 TON. It will take a few seconds to activate the TON Surf wallet… and you can work without experiencing problems with current exchanges and other projects. The wallet will be activated automatically.

And one more idea that is on the finish line is extra staking.

We are currently implementing a program that will make it possible to add up to 15% extra staking per annum to the network’s current reward.

And, in confidence… in September, we’re preparing four big projects that will appear in TON Surf.

All About Staking And Activating TON Surf Wallets. “Who Paid For The Party?”

Evgeny: Increased. In my comment today, I sent a link to an article about staking on the Free TON House, which gives a fairly detailed explanation of how staking works and what its benefits are.

Anton: Now is the time. Too many features are being developed at the same time. It’s time to complete them, put a full stop, and start technical debugging, optimization, and profiling.

Evgeny: September. I think we’ll do it in September.

Evgeny: All this information is available on TON Live. If we are talking about the numbers 32 and 10, then it is no secret to anyone that some users create multiple wallets for themselves. There are wallets that users have activated and forgot about their existence.

The next few questions were asked directly to Evgeny Teslov.

Evgeny: I think it will be ready within two or three sprints, two or three weeks, and we will write more about it.

Evgeny: That’s right. We will use DeBot, which will help activate the wallet.

Evgeny: Over the next two or three sprints, we will describe in detail how this works. Including in terms of technical implementation.

This UI Kit is our finished set of graphical elements, similar to the iOS Kit. The documentation has not yet been cleaned up, we are going to do that soon. But the entire visual part of the Surf has already been published in Open Source. The visual part of Surf (everything the user sees) is 80% based on what is in this UI Kit.

Ilya: I have a question about Surf. The motivation for its privacy is clear, but the practice of developing private projects does not exclude the fact that we can use Issues on GitHub to interact with the community. From my point of view, as a developer, this is a more convenient form of communication than telegram chat, in which large messages are typed in and some topics are getting lost.

My suggestion is to make a repository on GitHub where you can accept requests, bugs, and suggestions. This is the first case.

We have discussed the issue in groups and there is an understanding that this is a promising and necessary improvement proposal. This would bring real development to the community and the opportunity for each member to contribute to that development. Now it is impossible to do this in the chat because messages are instantly lost.

Ilya: It is important to create two repositories: one for suggestions. And the other one for features and requests. In order not to mix one with the other — these are two different things. After all, with the Proposal, we could develop Surf itself, as there are enough development issues, in particular, authorization, integration with the second version of Connect Wallet. The Connect Wallet protocol implies a blockchain-agnostic system, the implementation of which depends on what a wallet can and cannot do.

Anton: Is there any of this in written form? Is it documented on paper? In order not to lose.

Anya: There is a Surf thread on the forum, where we can write it down so as not to lose it.

The fate of the Web version of Surf

Evgeny: We’re thinking about it. Most likely there will be some kind of lite solution. It’s purely a security issue. Most likely, it will be a limited version.

Anna: The web version will probably remain in some limited form.

Evgeny: We will be looking “under the microscope” at everything that happens in the Web version of Surf. And if we come up with solutions that are secure to keep some functionality, we will definitely keep it. If there is no solution at the moment, we will have to look for alternative solutions or hide the feature.