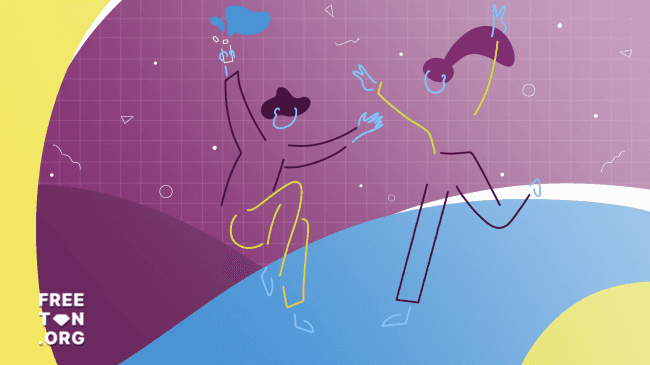 The offer appeared on the Free TON forum on 12.23.2020. The author proposes to develop an application-game in which users will pay with Crystal TON for alcoholic drinks.

The rules of the game are quite simple, all participants are divided into two categories:

bartenders are those who will serve drinks and the second category is those who want to get drunk. The transmission of Crystal TON occurs through the contact of smartphones, while one should be in the role of a bartender, and the other in the role of a drinker. After contacting the phones, one Crystal TON is generated and sent to the bartender. One drinker can send a crystal to one bartender no more than three times. Also, for confirmation, you will need to send a joint photo, which will be a confirmation that each of the participants has fulfilled the conditions.

Drinkers can generate a limited amount of Crystal TON, after exceeding the limit, the user will be asked to purchase coins on the exchange. In turn, the bartender can receive no more than 300 Crystal TON per day.

Any user who pours a drink can become a bartender, while it can be poured anywhere, for example: at home, in the car, or in a bar. In order to become a bartender, the user needs to make a presentation with video and photos. It is planned that the application will have a map on which all bartenders and drinkers will be marked, they will also be able to write to each other via telegrams. The bartender receives an application – a virtual bar, in which he fills in what and how much it costs in rubles, but when working, only the price in Crystal TON is displayed, which changes depending on the crystals on the exchange.

For design and code development, the author requested 200,000 Crystal TON.

Monthly payments that will amount to a million Crystal TON and more depending on the popularity of the application.

In my opinion, this is a creative idea that, in principle, will benefit the Free TON project, but the implementation is too expensive. Also, I don’t quite understand the meaning of paying for alcohol, this can be interpreted as the fact that the community supports alcoholism, etc. And such actions can cause more negative reactions than positive ones. Also, such an application is not aimed at the target audience, but will only attract people who want to drink for free. In the comments on the forum, the idea was met positively, but not without a share of skepticism, many users noted a large budget for implementation.

You can learn more about the offer by following the link.

How do you think this idea will benefit our community? Share your opinion in the comments.