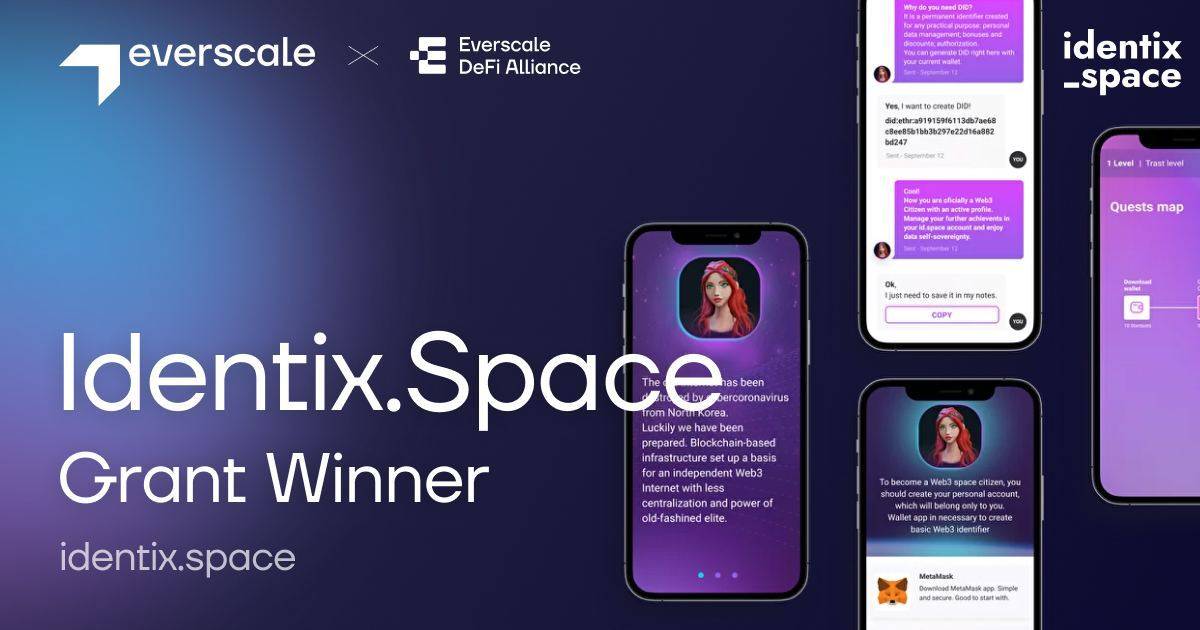 Identix.Space is a company that creates online quests for onboarding new users to projects. Number of quests will be developed with further support for Everscale. New users will go from creating a wallet to farming and staking BRIDGE, and the motivation for them will be a reward at the end of quests. The team will receive $50 000 in multiple payments as they complete the KPI. You can read an interview with the Identix.Space core team member.

1) Tell us about yourself. How did you get into the crypto world and what did you do before?

Daniel Novichkov: My name is Daniel Novichkov. Since January, I’ve been working with the Identix.Space team. We make the product "Educational Quests in Web3," which covers not only crypto, but also decentralization in general. Of course, first we start with basic things like setting up a wallet and making your first transaction, so that users understand how it all works. I got here, probably a very long time ago, because I even have a teaching degree. I once studied to teach English and French in my native Karelia, but worked as a teacher for a very short time, literally in practice. After that, I went into IT and did a lot of community work related to health care and human rights. In St. Petersburg, I worked for the French public organization Doctors of the World. Then, in Moscow, I immediately got into the online advertising business – we did contextual advertising. I retained an innate interest in the transfer of information; I’ve worked as a project manager for many years, and my interest has always been to understand customers’ business objectives and convey this to developers. I’m not a developer, but my task is to ensure communication between different people. For that reason, I began to evaluate product construction differently. Then I ended up on the Identix.Space team, because they were looking for a product manager.

2) What is crypto to you? What value does it carry?

Daniel Novichkov: It’s a new way for people to interact with each other. Cryptocurrency in itself is not interesting to me – I’m interested in decentralization. This is a change in public consciousness, where it suddenly becomes possible to use things that were inherent exclusively in states or some large financial corporations or institutions. All of a sudden, thanks to information technology, decentralization has made it possible for people to create. I can’t say that decentralization, cryptocurrencies, and blockchain are cheap tools, but it is all already becoming cheaper. It’s becoming a boxed solution, because everything will be used in blockchains. After all, this leads to mankind’s boundaries expanding, to the surface of communication between different people expanding. People who have a tool, a large number of communication tools, are more likely to come up with cool things. That kind of value isn’t expressed in price.

3) What crypto projects have you already launched? Are you working on them now?

Daniel Novichkov: Mostly projects concerning decentralization – Web3. There is one project that started it all off. It’s something that doesn’t require registration, which is basically transferring your personal data to some corporation. This thing came out of decentralization, when personal data and human understanding are the most valuable assets. How can we make it stop being such a bargaining chip and become truly valuable? We need to ensure that the end user is able to manage what they have and receive the full measure in return from whoever needs this value. Self-sovereign identity is about how we can preserve all the possibilities of communication, use of technology, without giving any personal data in return. It’s stored by you, it’s on your device. How can I make sure that my personal data is stored on my device and services are taken when I allow, and only to the extent that I allow? All this is part of Identix.Space’s strategy, and a quest is a way to talk about self-sovereign identity and teach people how to use it.

4) Are you saying the goal of your product as a quest is to simplify the use of blockchain and other platforms for new users?

5) What business model does your product have?

Daniel Novichkov: Users don’t pay anything, we pay users, because they are trying to learn, and they have a difficult task: to try. It should be the provider that pays for this – the one who needs users should pay for it. These are blockchains, Web3 projects, etc. We get money from them in order to create a quest with some kind of plot, and we build it in the form of a Telegram bot or launch a quest on the site, plus we do the work for the providers. We’re like receptionists.

6) Have you worked with other projects?

Daniel Novichkov: Yes, we have worked with Polygon.

7) How familiar are you with Everscale? How long have you been in the community?

Daniel Novichkov: The quest area is the first thing we have received a grant for, but it isn’t our first experience of communicating with Everscale. Before that, we were developing a module related to self-sovereign identity, but I can’t tell you much about that now.

8) Tell us about the most difficult quest you’re going to implement on Everscale.

Daniel Novichkov: They're all at the level of "tell me like I'm five years old." The entrance itself is complex in all this. The most difficult quest is probably about farming. We are still figuring it out ourselves.

9) Can the community help with quest creation?

Daniel Novichkov: We are open to any offers. You can contact me.

10) Do you see advantages of Everscale over other networks? If so, which ones?

To be honest, technically I didn't have the task of comparing blockchains. What was striking to me was that Everscale has very close people. You start talking, and 10 people immediately communicate with you. You are already creating everything together; we’re helped with scripts to write, ideas to come up with, and a very lively community. We are very much supported.