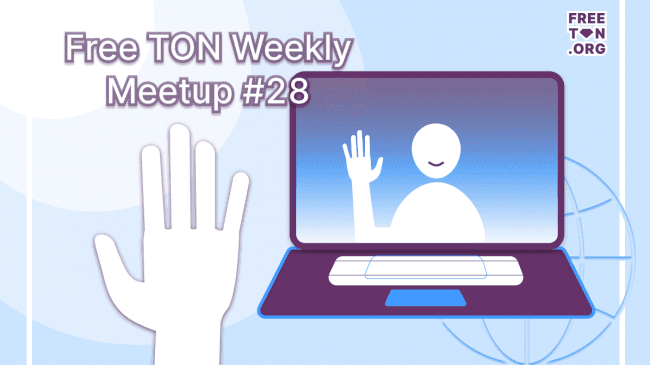 This Tuesday, November 10, the 28th weekly Free TON meetup took place. This time it was held in an unusual format: the representatives of the Sabgovs held it, telling us about the achievements and progress of their communities.

The meeting started on a good note: the first thing discussed within this event was the 6-month anniversary of the project, which took place last week. The participants even remembered a photo of a cake dedicated to this event, baked by one of the community members and posted in one of the chats.

Then the word passed to the representative of the Wiki Subgovernance. Their accomplishments were illustrated by a vivid and beautiful presentation that attracted everyone’s attention. The essence of the presentation lies in the following: at the moment Wiki has been translated into 17 languages, contains over 600 articles, has over 20 active authors and translators, over 230 community members, and the total amount of rewards paid to authors is approximately 40,000 tokens. Achievements in October include the completion of the migration to the mediawiki engine, the formation of a full complement of judges, termination of the voting on the maximum number of articles in reserved by each member of the community, the transition to Team Report which was completed, as well as the fact that Wiki became mobile-friendly and spam-resistant.

After that, the participants of the meetup got acquainted with the updates of the SMM Subgovernance. Most of the presentation was devoted to the community blog, which is currently being developed very actively, and which now contains about 100 articles and 4 podcasts. In October, 2 renewal contests were held in the community (rewarding active community members in accordance with their contribution to its development), a contest for choosing the best blog with a prize pool of 120,000 TONs was also completed, 2 bots were created: a newsletter sender and an article proposals sender. and the team also began to create timecodes for meetups and AMA sessions. The work continues along the same lines: a contest is held to choose the new members of the jury, the technical side of the blog is being improved, including issues found due to the feedback from users. An active recruitment of authors is going well, a new content plan is being developed, audience involvement is being increased in various ways, and new contests are being prepared. It was also announced that an AMA session devoted to the blog will take place on Saturday.

The next speaker represented the eSports Subgovernance, saying that during the tournaments held in October, almost 17 000 tokens were distributed to the participants. A special platform was developed for this, allowing  integration with various tournament platforms. A total of 23 tournaments in 4 directions with a total playing time of 7 hours were held, bringing together 244 teams and over 1 200 players. The events were covered by 28 streamers of various levels, some of them are very popular in certain circles. The team is currently planning integration with Blizzard games to increase audience coverage, as well as a number of larger tournaments in November and December. A new model of inviting users to the community will also be tested in order to solve the problem of the same composition in every tournament. Finally, a partnership with the Swedish tournament platform epulze, which has 350,000 users was announced.

Then a representative of DevEx Subgovernance took the floor. She informed us about the community-run contests, a complete list of which can be found here, including their timeline and results. Among the active contests, the contest for the choosing the jury was noted, voting on which will last until November 15, 2 RTDB contests and a number of others. The community also compiled an impressive list of future contests, but it was noted that not all of them will be held in the near future due to the difficulties of their organization.

After that, participants of the meetup learned about the updates of the Web & Design Subgovernance. The community was officially formed only last week, and its first contest for the selection of juries was launched the day before the meetup. One of the main directions of the team’s work is the launch of a new website, more modern and convenient, the technical part of which is already done, but the content is still being developed. The team is also working on automating some features, including the contests widget, proposals widget, etc. One of the goals of the community at the moment is not to allow digital resources that they developed to remain in their original form, but to turn them into “living organisms” and to make the process of their development automatic. The community will soon be launching contests to attract talented designers and illustrators.

The next speaker was a representative of the DeFi Subgovernance, who started off by saying that the community is now actively working to build connections with all DeFi projects that can be built on the Free TON blockchain: bridges with other blockchains are being built, at the moment it’s Etherium and Polkadot. A few days ago, the contests aimed at developing the architecture and design of these bridges ended, and now the stage of their implementation is almost on. A contest for Dex development was also launched and a contest for the selection of juries was held. The next step will be the release of a stablecoin, one of the contests is also dedicated to this. An upcoming partnership with Hexa Group was also announced.

Next, a representative of the Korean Subgovernance spoke about what was happening in the community. As already known, the goal of the community is to promote the adoption of Free TON in South Korea. For this, a number of contests were launched, including a decentralized PR campaign contest, where 128 applications were submitted with some very different ideas. A number of partnerships have also been established and work in this area continues. A partnership contest will be launched soon, everyone will be able to participate in it. One of the initiatives was the idea of ​​developing a platform similar to Wiki, but in a Q&A format, which is closer to Korean culture, and now there is a recruitment of people in the community who can take on this responsibility. The team is also working on cooperation with other Free TON subgovernances, for example, with eSports – it is planned to hold a Russia vs. Korea game tournament.

Then the word passed to the DGO Subgovernance, whose representative started off by saying that the community did not hold the contest for selection of the jury. This happened due to the fact that the number of applications was insufficient, and according to the Free TON rules, the voting was not open and the contest was restarted under the updated terms this Wednesday, November 11. The community news ended there.

Finally, the meeting ended with a presentation by a representative from the Analytics & Support Subgovernance, which was launched recently. The community is responsible for providing help in making decisions regarding partnership proposals: analyzing the data and metrics of a potential partner, analyzing the terms of the proposal, etc. Also, the community will deal with statistics of payouts, community reports, as well as the translation of non-English-speaking subgovernances. A contest has been launched to select the jury, and several other contests are being prepared.

At the end of the meeting, several important statements were made. First of all, it was proposed to create a new community – Influencers Subgovernance, which will focus on attracting opinion leaders, influencers and various media platforms to the Free TON community. The team has already prepared a community action plan and posted a proposal on the Free TON forum.

It was also announced that the Mexican Subgovernance was officially formed just a few days before the meetup.

The meetup ended with a discussion of its format. The participants agreed that it can be considered as one of the most efficient formats – most likely, such meetings will be held on a regular basis. The full version of the meetup can be found here.